Life Keeps Getting in the way of My Life

I have things I want to make, do, and see. Places I would like to visit, chores that need done, books that should be written (more that need read), groceries that need bought and bills that need paid. But as of late, it seems I mostly have knits that need designed. 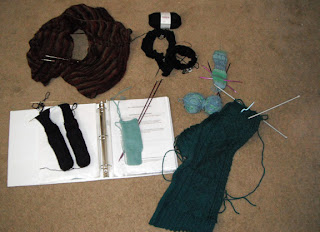 This is the current work-in-progress pile, or the PhD pile (Projects Half Done). I am ashamed to admit how long most of these items have been on the needles, though in my defense I have lost two of the last six months to tendonitis, and then there were the holidays, too. So it's not all my fault.

Though come to think of it, maybe having a little focus in my work would be beneficial...

Let's examine the damage, shall we? 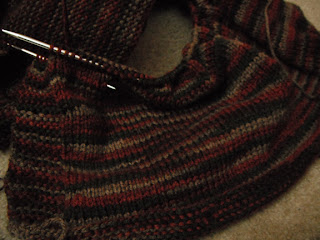 In excavating the layers of my knitting basket, the first striation we come across is a basic stockinette afghan, cast on at the start of the winter months as much for variety of knitting material (i.e. size of needle; see tendonitis above) as for warmth, since the moron who built our apartment complex obviously did not know what insulation, double pane windows, or general weather sealing are. What could be better than a blanket that keeps you warm as you knit it?

I don't remember the name of the yarn for this, but it's a generic aran weight I picked up at Michael's for $9. 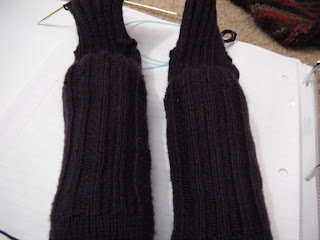 The next level is The Socks. I started these around December 7, having had to wait for funds to clear before I could order the supplies, and then as soon as I cast on the brand new needle I'd ordered for the project broke. When the replacement came in, I discovered that the join between the needle and the cable was sub-par, and ended up switching to one I already had. These were supposed to be done for Christmas. Right now, I'd be pleased to finish by Easter. (When is that again?) These are toe-up knee highs knit on one long circular needle, with an afterthought heel (to be added) out of KnitPicks Comfy.

(note: these look a little funny because when I'm knitting from the toe up, I keep the yarn inside the foot of the sock. Keeps it clean, neat, and out of the kitten's mouth.) 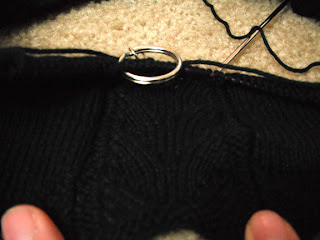 As we dig deeper into the project bin, we find the Evie shell, so named because it is based on the main character of my novel Threadbare, which is currently making the rounds to various potential publishers. Also made of KnitPicks Comfy, this is the project that brought my knitting to a halt last fall.

This is my first time delving into the world of actual lace, rather than the Cheater's Lace I usually do, which mostly involves using really big needles and doing yarn over, knit 2 together over and over again with no real pattern in mind.

This project has been on hold since Christmas, because I can't seem to work on two major projects on size one or two needles at the same time without risking my limbs, and really, those socks are more important at this point. Though it's disappointing, because I found a magazine that this pattern would be perfect for submission. Too bad there's no way I'm finishing before the deadline. 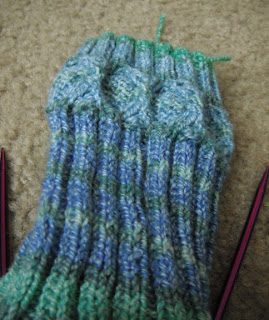 We have now reached the point were it becomes embarrassing to look at things.

For example: This is not a pair of socks. This is just a sock. Just one. One sock, which has been in roughly this same state since...uh...September? What's worse, the pair was supposed to be finished in time for Missouri's book release. With photos. And completed pattern.

Part of the problem with this sock is that I'm bored of the pattern. The prototypes were knit, ripped, and re-knit about five times. Then I had to make a second pair because I discovered an extra set of ribs in one of the socks, and the sizing wasn't quite right. I corrected that problem in the pattern, but simply can't get up the motivation to finish this pair.

Other reasons/excuses why it isn't finished: I'm not over fond of the yarn. It's okay, it's just...meh. Really nothing exciting. I would tell you what it is, but again, can't find the ball band (I swear they are all around here somewhere). I do know it was el cheapo sock yarn from Michaels, which kind of explains the problem right there. I'm a yarn snob when it comes to socks. I should have remembered that when buying this.

Additionally, this is one of those smaller-gauge projects that risks mobility and limb for me, so it's been on hold while I try to finish other things. 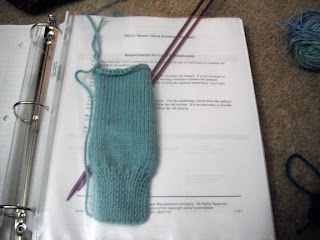 When I pulled out my TKGA binder for this photo, I thought I had three or four of my Master Handknitting swatches complete. Turns out, it's just two. I'm also behind on my questions.

When I got my packet back in July, I thought, "Knitting! Tiny swatches! Writing about Knitting! I'll be done by Christmas!" In this case, life happened. Other projects took precedence, and once again, I had to put this on hold because of physical challenges. See, I knit...weird. Not like a lot of other knitters. It's a side effect of being mostly self taught.

Then there's the carpel tunnel/tendonitis issue. I normally knit much looser than most instructions call for. Doesn't really bother me, but to meet the standards of the program, my stitches have to look a certain way. So instead of using a size 8 needle as the yarn recommends, I have to use a size 5 and knit as tightly as humanly possible.

But I still don't think that's a good excuse. I should be further with this. Especially since my 1 year deadline is in July. 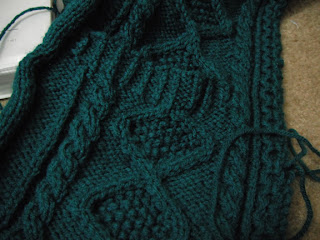 Forming the bedrock of our dig site, we have the London Calling Cabled Cardigan, from Vogue Knitting...Fall 2010. Yes, this sweater has been on the needles for about a year and a half now.

When I pulled out this piece (which is only one of the fronts; there is more done), I had a brief moment of panic because the panel that was actually in progress was missing. I didn't panic because I'd lost all that work. I paniced because I thought briefly, "Oh, I'll just start over. I've been thinking it would be better seamless." Yes, you read that correctly. I considered ripping the whole thing out and starting over again, even though at about 50%, this project is the furthest along of them all.

I've kind of been avoiding this project. I like the pattern. I like the sweater. I even kind of like the yarn (even if it is just some basic Red Heart). My problem is that I am concerned about the shoulders and the sleeves. I'm afraid they won't fit. Part of the temptation to start over is not just to create a seamless body (knitting the fronts and backs together as one long flat piece, then separating at the underarm to finish the rest) but also because I'm considering going up a size. My stitch count is for the small, though my measurements actually match the large (like I said, loose knitter). When I whip stitched the completed pieces together to give it a test thought, it just didn't have the ease I'm looking for, especially in the bust and shoulders.

I think I just talked myself into starting over. ¬_¬

See, this is what happens when I try to get things done.

ETA: I was going to finish the last few inches on the cardigan. I started knitting, and working on the decreases, and realized that for some reason, it didn't look like the other front. And then I held all three pieces up together, and realized that somewhere along the lines, I'd made an error in the cable pattern and none of those cables lined up. If I were to finish it as is and wear it, I would look lopsided because the fronts are offset by half a repeat.

So. Starting over it is.