1. I recently finished Gate of Darkness, Circle of Light by Tanya Huff. This was her second or third novel, I believe, and one of her lesser known ones. I strongly recommend that any fans of urban fantasy check it out as it is just as good as her Blood Ties books. It follows nicely in the vein of The Enchantment Emporium (or would it be leads, since it came out first?). I found it as part of a twofer, Of Darkness, Light, and Fire, which includes another of her early works. I've only just started that one but it promises to be just as good, if not better.

2. I also finished reading The Enchanted Typewriter. I am planning a more complete review for the podcast, which I hope to record tomorrow. If it doesn't happen then...well, I mentioned at the outset that the production schedule would likely be sporadic. It will probably be November before I manage to get another episode out.

3. Part of that delay is that I am moving over Halloween weekend. No idea when I will regain internet access or how long it will be down.

4. The typosphere has been abuzz with the upcoming start of NaNoWriMo. Just to set the record straight: I have no plans to participate. My only acquaintance with short deadlines is the whizzing sound they make as they zip by and they've nearly decapitated me on an occasion or two so I generally avoid them on principal. I will, however, endeavor to finish Threadbare (formerly known as Fortune's Fight) BEFORE the start of November, if my paying job doesn't suck the life out of me like so many vampires. (Really, it's like Dracula meets Clueless. Never give a vampire a credit card.) I am doing this so that I can work on my Untitled Jazzpunk Novel as soon as possible, because...

5. THE THREE MUSKETEERS IS AWESOME. Seriously. Alexandre Dumas + Orlando Bloom + Matthew Mcfadyen + steampunk = THE BEST THING EVER. EVER! Also, it was total costume p0rn and I want every single outfit and prop associated with Countess de Winter. I have a strong desire to cosplay her at the earliest opportunity. 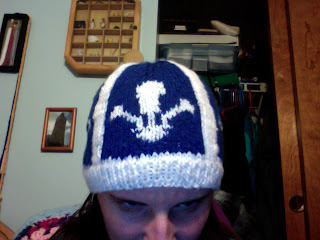 6. While it isn't truly a costume, I did finish knitting my Quebecois pride hat this week. This has been in my queue for years (ever since I made a scarf based on the Canadian flag). This couldn't have come at a better time, since...

7. Thursday night we drove out to Beavercreek for the Kathy Reichs signing. For those of you unfamiliar, she wrote the books that the Bones TV series are based on, though other than the name and occupation of the main character they really bear no resemblance to the source material. (For those not catching the connection here, in the books Temperance divides her time between a North Carolina university, and working for the government of Quebec. In Montreal. In a building that I am enough of a fangirl to have photographed just for it's relationship to the books.) Sadly, both Mom and I forgot our cameras, so I only have one cellphone picture: 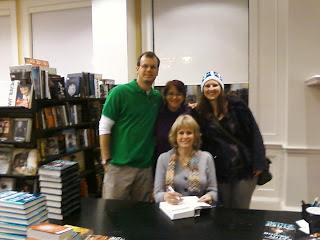 So that is my list of awesome. We'll see what next week holds.

P.S. I just went through to add links to everything in this post, and it appears Kathy's site is down due to bandwidth limits. Looks like that last signing broke teh internets.
Posted by Sheena at 8:23 PM