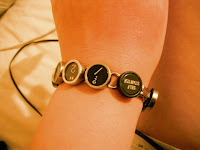 So the other day, we were chatting with my aunt and uncle and told them the story of how I got my first typewriter, Henry (Royal KMM):
My parents were at an auction, and spotted a cluster of items up for sale. Among them was the dusty Royal standard, and they decided to bid on it, what with me being a writer and everything, and collecting antiques and everything. They lost, but when they approached the buyer to see about buying just that item they were surprised to discover that it was the same guy who made the typewriter key bracelet my mom picked up for me at a craft show just a few weeks prior. 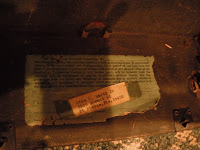 So, we saved a machine from a keychopper. I mentioned that if they spotted a portable machine in good working order at another auction to pick it up, since I wanted something I could use outside since it's a little much to be lugging around 30+ pounds of cast iron.
That was when my uncle pipped up with, "Hey, I think we've got a couple of old typewriters out in the garage." A few minutes later he produced a rusty, stiff, but apparently still working Remington portable with the original case, minus the handle. It still has the warenty sticker inside and a sticker on the front from the original dealer. 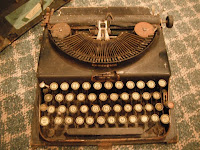 I find this machine puzzling on many levels. 1, I can't seem to figure out the case. I can't get it on or off without help, because apparently, I can be outsmarted that easily by a wooden box. And 2, I can't seem to find a model number or serial number on it. I'm thinking it's probably a #2/Compact Portable, but I'm not positive. Any suggestions from out there in the typosphere?
Posted by Sheena at 10:02 PM