(For now, that's all you get, since it's a present for someone who might be reading this.)

Originally, I was going to crochet the gloves so that they would get done faster, but that plan failed. It's been so long since I crocheted with any regularity that I was not even remotely happy with the results. The fit was wrong, the fabric was too dense, and my gauge changed from one to the next so while one mitt was almost too tight, the other was far too big. So I tore them out and put them on a circular needle. Anymore, if I have to make two of something I always make it two at a time on a circular needle, just to make sure they're identical.

Now that I've got those off of the needles, it's time to get back to the samples I'm making for CENSORED. I picked up some great yarn a couple of weeks ago when there was a Nano write in held just a few doors down from my favorite yarn shop, but once I got home I realized that it was far too thin. Once I have the funds, I'll go back and grab a second skein of each color so that I can hold it double.

Since most of the CENSORED projects aren't great for taking to and from work, I also pulled some socks out of hibernation. These have been languishing for a couple of weeks while I tried to knock out a few other small projects: 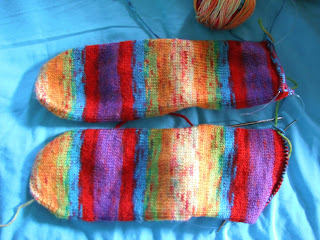 These are made from the toe up, using Serenity Garden--it's actually the same yarn as the fingerless gloves, but a different colorway. I've also got this yarn in pinks and browns; I love working with it.

I made these as a tube, then marked where I wanted the heel to be. Using DPNs, I tore out the provisional stitches and put in an afterthought heel. Now I'm just going to keep knitting until I run out of yarn, and I should have some nice high socks--I'm hoping for knee high, but we'll see.

The downside to all of this productivity is that I had to put the London Calling cardigan back on hold, and after I finally got the new circular needles that I needed for it! Very frustrating. But, it'll still be there after the holidays when I hope to get back to it. Since it's mostly small pieces left now, those will become my knitting to-go once the socks are done.

Just a heads up: after fighting with Blogger for the past two weeks, I've made the decision to change my host. Sometime either this week or next, I'll be moving the whole thing over to Wordpress. URLs will change, and things will look a bit different. I'm not sure how or if the archives will be effected, but I'll let you know so that you can update your bookmarks. Please be patient with me and cross your fingers that I don't accidentally bring the whole thing crashing down!
Posted by Sheena at 2:30 AM